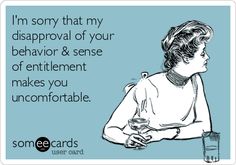 Today’s society is becoming increasingly rude and uncultured. While I understand that kids can’t always sit still in church, or that they can cry out loud on cue at the store, I do not understand the adults.

In a recent article I read, a guy could not get people to quiet down at a coffee shop, so he used what they were talking about against them. They were discussing potential business details and its name. The author of the article flat out bought the domain with the name of the business the people came up with. Some might think that was spiteful, but after what I see around me more often than not, I think it was genius.

On another occasion, an obnoxious woman left her dog’s poop on an airport’s terminal floor without trying to clean it up in any way. The author of the article says that there was a special pet zone for that kind of business nearby, but I understand that she wasn’t aware, or that the dog just had to go. However, she could have made more of an effort to find someone to clean it, instead of proceeding with her life like nothing ever happened.

Of course, such insane behavior stems from childhood and the lack of any sense of direction from the parents. I see a woman with a 7-year-old on a bus and they are both sitting in the “elderly/disabled” seats. All the seats are taken. An old lady gets on and she is clearly having issues with coordinating the whole “standing/holding on for dear life situation”. I know that the mother or the child might not be feeling well, or have a disability of their own, but they are laughing and chatting away while intermittently playing on their phones. They see the old lady. They do nothing!!! The child doesn’t get up, the mother doesn’t tell her to. I have to be the bad guy, so I politely ask them if maybe they are both disabled. The kid looks at me as if I’m from Mars. The mother rolls her eyes and tells her kid to just sit in her lap. They go back to playing on their phones. The old lady thanks me and sits down. What an accomplishment! Before there were 2 people sitting, now it’s 3!!!

A 5-year-old keeps running up and down the aisle in church while her mother does nothing. The kid is not so little anymore. She should have SOME sense of what church is and how to behave in it. When the child runs past me for the nth time I whisper to her asking to go back to her pew. The mother sees it and comes to reprimand ME. Ok, I understand that – she is being a protective lioness over her cubs and she will take care of the situation herself because after all, she has realized that she should try to parent her child sometimes. Oh, that is NOT what happened. She ran to her other daughters and told them all about it. You can only assume what she said to them after them all turning around and looking at me as if they were going to kill me.  That is even more dangerous than the lack of parenting. It just instills the “snowflake” idea in them even more.

Once on a bus, a woman in her 20s puts her nearly-finished-drink on the floor and then… changes seats, leaving the cup behind. Everyone can forget, right? So I remind her. Firstly, she gets mouthy with me and then proceeds to perform more physical acts of contempt like trying to spill the remains on me (scattering different parts of the plastic cup around the bus) and trying to pick a fistfight. No one around cares. If no one cares, why bother. It must be I who was in the wrong. I must be nitpicking. One person cannot change the world, which is going downhill fast…

For the love of all that is holy, please do NOT be that person who listens to their music on their phone loud through the speaker in a crowded place. It’s called being respectful. Or, please do not talk about BS on speakerphone for an hour either when random people surround you.

If we were more RESPECTFUL of one another the world would be prettier, we wouldn’t be as stressed and we would all be more peaceful.

30 thoughts on “We owe it to ourselves and others to learn and to teach.”