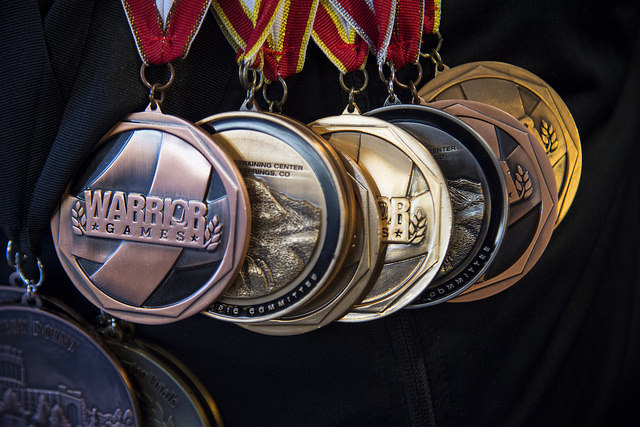 In the light of the 4th of July weekend, I decided to compose a post, which would be a bit more positive than usual. After all, we do have a lot to be thankful for.

Chicago has been blessed with sunny weather for the past few days, and so I decided to make the most of it this weekend. When I first heard that the Warrior Games were going to take place in Chicago, I got really excited. First of all, I had no idea that something like this was even a thing. I have seen Paralympics before, but never had I thought that the Military would be hosting an event like that of their own. An event during which wounded veteran athletes compete in different fields, like shooting, archery, cycling, track and field, swimming, sitting volleyball and wheelchair basketball. Secondly, these games were to be hosted outside of a military base for the first time. I had to be a part of that history, and so I decided to attend the Opening Ceremony on July 1st, 2017.

Oh, what a great time I had! It is estimated that 10,000 people attended the ceremony in support of the Warrior Games. “About 265 wounded, ill and injured service members and veterans” from the five wings of the USA military (Army, Navy, Marines, Air Force, Special Operations), as well as from the UK and Australia, arrived to compete for the title of the winner of the Warrior Games (currently held by the Army). It was amazing to hear that this was going to be an international #CompetitorsAndFriends event. It is my believe that this event should get more coverage in the future. Not only because it is healing to the competitors, but because it is also inspiring to regular people like you and me.

Jon Stewart hosted the ceremony, Kelly Clarkson and Blake Shelton performed mini concerts, Jordan Howard (of the Chicago Bears) made an appearance and Sam Moore sang “God Bless America”. That of course added to the celebration, because it enabled people to relax and enjoy themselves in the spirit of unity and comradery. It was mentioned a few times during the ceremony that what is important for the participants are their teams, from which they draw strength, inspiration and support. During Shelton’s performances a “USA” chant broke out throughout the stadium, which gave me goosebumps. Even though we might have different opinions, hopefully, we all want the best for our country and our fellow citizens.

Aside from the celebrities, the raw opening was also beautiful. The competitors were warmly welcomed as they entered the stage in their teams. They were cheered on and applauded by the audience. Thanked for their service and applauded for their resilience and perseverance. There to celebrate them were also their loved ones, who also deserve a round of applause, because it is not easy on them, either. Intermittently, we were able to see video clips of some of some of those warriors sharing their stories with us. People shed tears, but the heroes did not want our pity. They wanted to show us that they fought for their beloved country, they were wounded, but they are still alive. Still fighting. Still pushing the limits on their capabilities. They trained for months (if not years) to compete in these games.

I had the opportunity to chat with some of the Navy folks, as well as the UK team and they were all delightful to talk to. During the entertainment portion of the night, they danced and sang and enjoyed themselves like anyone of us. They all seemed humble. There was no anger. No animosity. No one seemed stuck up. We think we have it bad when we get a hangnail. They actually fought for our freedom, so we could be upset about the little things (vs. active war). Sometimes we get punched by life and we get depressed, which leads to us staying in bed and being useless to ourselves and society. These people, some with extensive disabilities, work hard every day to challenge themselves and to go where no one expects them to go. They have been through so much, and they are still able to enjoy life.

All of this reminded me of how much I have to be thankful for. That no matter how bad things are, there is always room to grow and to better myself. If someone, who is worse off than me, can do it, there should be no excuse why so can’t I!

“The Warrior Games is all about recovery and rehabilitation and eventually reintegration into our services and back into our normal lives. It’s beautiful and brilliant to see…” – Navy Chief Petty Officer Robin Elkington, Australian Defense Force.

7 thoughts on “To be inspired…”